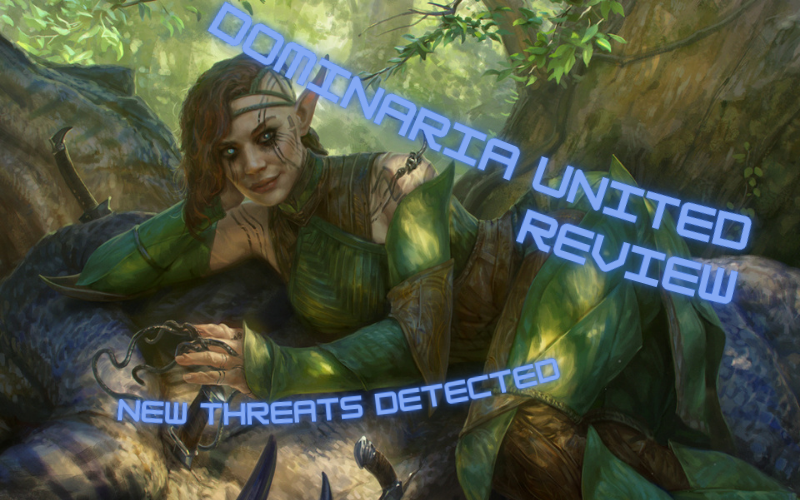 In part one of our Dominaria United review, we covered every Elf printed in the latest expansion for Magic the Gathering. This time, we’ve got all of the non-Elves that could be relevant for Elf decks. As we saw last time, the set only has a handle of useful Elves, so let’s see if there are some fun new tools for us here.

As always, this review focuses exclusively on a card’s application in Elves decks across Magic‘s many formats. If you think there’s a cool card for your Merfolk-tribal Commander deck, this isn’t the review for that. (That card’s still cool though, whatever it is.) The rating given at the end of each entry is out of five Trees and applies to whichever format the card suits best.

At this point, I’ve talked about quite a few fight and/or bite effects. This is one of the cleaner ones we’ve had. It can hit creatures and planeswalkers, which is an upgrade over some versions we’ve seen.

If you’re really hurting for a sideboard removal spell in Standard Mono-Green Elves, this could be it. However, I don’t even know if that deck can exist until we get a few more Elves in later sets. Also, Standard is currently so Multicolour that you can probably find removal from your non-Green splashes.

Defiler of Vigor is a very exciting card. For an investment of five mana, you get a lot of raw stats and an ability that synergises with all the one-mana permanents we run in Elves. Upon reading the card, one immediately starts concocting Magical Christmas Land scenarios.

Of course, reality often doesn’t work out as well. Often, Elves players have already emptied their hand by the time they’re playing the large creatures. Defiler kind of asks you to sandbag an Elf or two in your hand to play after it so that you get its most powerful effect. Doing so worked well for me in Dominaria United draft (where this card is a bomb), but I don’t know if you can afford to do so often in constructed.

I do want to try a concoction in either Pioneer or Modern with Defiler, Realmwalker and a draw effect, but I don’t expect it to be the best option. I do hope to put my entire deck into play at least once.

Beyond that, Defiler is a powerful top end in Standard Elves, if and when that deck materialises. Although it does compete with our next entry.

Silverback Elder does a lot of things. As with Defiler of Vigor, you probably have better things to be doing with five mana in older formats. However, Silverback Elder provides a very different set of effects. Where Defiler pumps up your board and helps you push to win, Elder can help stabilise against aggression or remove problem permanents.

Unforetunately, Elder doesn’t do anything immediately. Unless you can follow it up with another creature on the same turn, removal really hurts. At least a 5/7 body is huge for blocking with on the turn you cast it.

I’ve been messing around with using Silverback’s lifegain to offset Defiler’s life payments in Standard. I can’t really see it making it beyond that. (I do like how coming back to Dominaria gives us cool Gorilla cards, though).

Obviously, Tear Asunder is a sideboard card, but as sideboard options go, it’s quite a good one. Having your Naturalize be able to kill anything when there aren’t any Artifacts or Enchantments around.

In formats where you have Assassin’s Trophy or Abrupt Decay, you’ll probably use those. Although, if the fact it exiles rather than destroys is relevant, Tear Asunder has a chance.

Gifts Ungiven is one of my favourite cards of all time. Threats Undetected is not Gifts Ungiven. It wants to be, but it isn’t.

With Gifts, it’s fun to have access to a suite of different four-card piles you can create. However, you always have the backup mode of double-entombing two cards. This doesn’t give your opponent any agency. You just put Elesh Norn, Grand Cenobite/Iona, Shield of Emeria and Unburial Rites into your graveyard and win the game. The fact that Threats Undetected doesn’t have a guaranteed mode really hurts it.

There’s also the additional limitation of requiring the creatures to have different powers. This greatly hinders the ability to find a set of redundant effects.

Generally, you’d be best served playing Winding Way or Lead the Stampede to provide creature draw without giving your opponent any choice.

All this being said, Threats Undetected does gets me thinking. I’m going to end up trying a deck with it in at least once. I assume it will end up like Ecological Appreciation did, although the limitation and mana cost are less punishing.

I do like the fact that there are a set of Elf Lords with powers one through 4, so that’s one effect we can run enough of. It also gives me an excuse to run Wilt-Leaf Liege.

It won’t be good, but I have to give it chance.

Tooth and Nail is a powerful card. It’s been a long time since such a card has been considered for Elves. However, if a truly huge top-end creature shows up, The World Spell could do a decent Tooth and Nail impression in recent formats.

If Standard Elves becomes a thing as the next few sets come out, it’s likely to include White due to Streets of New Capenna‘s Elves being from Cabaretti. As a result, including Ajani, Sleeper Agent as a card advantage engine is likely very easy.

In grindy matchups, having Ajani sitting around finding you more creatures will help you keep up with opposing removal. Vivien on the Hunt provides a more powerful version of this effect, but Ajani can come down for half the cost.

If you do ever get to that ultimate, it will end the game extremely quickly, but the main draw here it the +1 ability.

If you need untapped lands that provide you Green and another colour, the Painlands aren’t the worst. In older formats, we have better options for mana, but it’s worth being aware of what lands are available in different formats.

It’s good that they’re getting a reprint here because they have names unique to Dominaria.

Overall, for a set taking place on the plane of Dominaria, I was hoping for more support for everyone’s favourite Green tribe. The set isn’t awful for us by any means, but I had high hopes. Fortunately, Leaf-Crowned Visionary might single-handedly carry the set.

That being said, I’m actually excited to try out some of the new tools discussed here. Even if I’m not expecting them to break any format wide open, they do activate the deckbuilding part of my brain. Brewing new builds of Elves with these new cards will be fun, whether or not it’s successful.

Talking about trying out new cards, the last two weeks on our Twitch channel have been devoted to testing out Leaf-Crowned Visionary and have been fun. You can catch more Dominaria United brewing streams on alternating Thursday over there.

Next up, we have Brother’s War, which means we’re staying on Dominaria. Let’s hope the plane’s past can give us some new cards to play with.