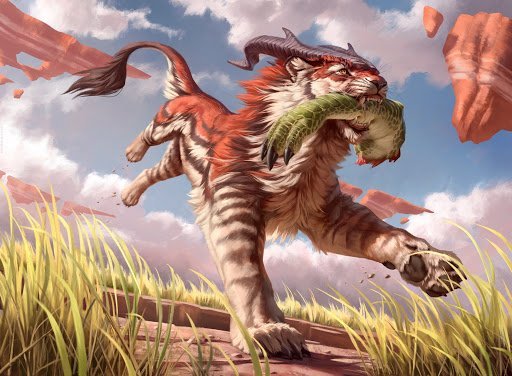 A few weeks ago, Zendikar Rising brought a host of new cards to Magic: The Gathering Arena. The new set invites players back for another round of questing on the adventure plane of Zendikar.

With paper Magic off the cards for most of us and controversy rife, we could all benefit from reconnecting with the parts of the game we love.

That’s why I’ve assessed all the cutest creatures in Magic: The Gathering Zendikar Rising and rounded up just the top five.

Need help getting into the spirit of things? This is the only time you get to yell “get in my party!” at the screen without being ostracised. Alright, let’s rope-swing into the fray!

Your party consists of up to one each of Cleric, Rogue, Warrior, and Wizard.

Now, I like to party as much as the next Magic player. Possibly a bit more. But if you’ve been focusing on packing party members into your decks, you’re missing out on the best part of the new expansion.

Not all cards are created equal: some are objectively cuter, and that’s what we’re here for. Consider, if you will, a new kind of party.

Forget rogues, clerics, warriors and wizards; the folk you really want at your side when the going gets tough are the ones with soft fur and big puppy eyes.

Flora, formerly a rune-carved stone hedron, has been stunningly brought to life in this double-sided art from Randy Vargas. And she’s got a lot going for her: those shockingly good looks hide tantalising mysteries. Just check out the flavour text hints about the ‘unfettered wonder’ of new life blossoming on Zendikar.

It’s lovely, yes. But we’ve been around Zendikar long enough to treat mystery with a touch of suspicion, no?

Honourable mention number two is going to be divisive. The latest printing of Lotus Cobra is 60% pretty flowers but the snake still gives me the heebie-jeebies. If it’s your favourite, then I’m sorry, but snakes and spiders are disqualified.

Similarly, I’ve nothing against Skyclave Geopede, but we’re pursuing the maximum cuteness for the maximum number of people here. More than six legs or fewer than two, and you’re out.

So without further ado, here are the cutest creatures you can take for a walk round Zendikar Rising.

He is a Good Boy. I am of course referring to the six-legged steed, who I prefer to think of as the veteran in question. Perhaps he’s mentoring the tiny human through their first adventure? Either way, I would like more details and perhaps a novel about their exploits.

Adventurer doesn’t make it further up the ranking because it’s frankly hard to see what’s going on. Get that hairy rump out into the sun, friend!

My only gripe with Gnarlid Colony is that it could do with more gnarlids. These horned hunks look something like a koala (famously grumpy) crossed with an antelope (famously spiky). It’s fair to say there are some questions I’d like answered before inviting a Colony home.

As a result, I’ve had to mark them down for temperament, but there’s no doubt you want them on your side.

These fluffy friends will catch your dinner and cuddle afterwards. Their lush fur makes them perfect fireside companions -and their fangs are bound to come in handy, too. Will watch over you during wild camping adventures.

In your cutie party, I imagine Felidar is going to act a lot like FFXV’s hyperactive groupie, Prompto -although without the hair gel, hopefully.

I’m a big fan of the showcase art treatments Wizards have commissioned to highlight the landfall theme in Zendikar Rising. Since both Felidar Retreat and Prowling Felidar are featured in that series, I couldn’t pick a favourite: it’s a tie for bronze.

Not everybody is a fan of Simic’s -how can I put this –hands-on approach to evolution. I’ll be the first to admit there have been some spectacular failures in the cutie department. (Hydroid Krasis, I’m looking at you.)

But don’t let that colour your opinion of this Familiar. He’s hitched a ride in your rucksack just to spend the day together and -according to the flavour text -might also charge your phone?

Either way, we can’t get enough of this mischievous stowaway. Welcome to the party, Familiar. Enjoy your silver medal!

The only downside to this card is that I’m no longer going to win any quizzes for knowing what a jerboa is.

Look at that snoot! And those gracious, tufted ears!

Bonus points for the alternative art clinched the victory for Canyon Jerboa. Who wouldn’t want an adventuring companion with Sandshrew’s looks, Raichu’s tail and creatures you control get +1/+1 until end of turn?!

Cutest groupings: is this a deck?

Now, I did promise you could take these cuties for a walk, but I have to be honest: that’s going to depend on whether you want to win any games.

All of our picks pull their weight in the Limited format -so no major concerns provided you’re happy taking them out one at a time. But if you want to ramp up the cutie count (don’t call it a draft strat), here are Hexagorgon’s compatibility hints:

There’s no denying we have a lot to worry about -as Magic players and as human beings. But, by focusing on things that bring us joy -no matter how small or fluffy -we can build resilience.

I hope this tour of Zendikar Rising’s cutest creatures helped you reconnect with one of Magic: The Gathering’s most underrated attributes.