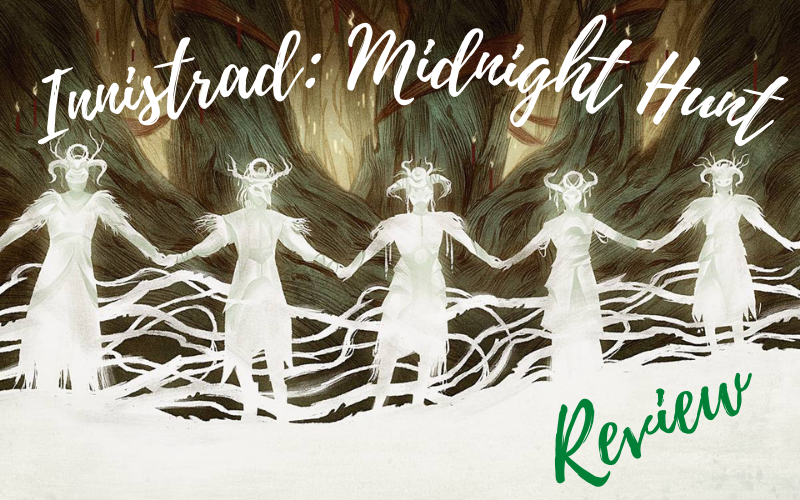 Magic: The Gathering is returning to one of its most popular planes of all time, Innistrad, the Gothic Horror world. Innistrad: Midnight Hunt will be followed by Innistrad: Crimson Vow, so us Elves fans will have to hold out until next year before any new Elves will be printed. Despite Innistrad being completely bereft of Elves, it remains my favourite plane in the multiverse.

The previous review, for Adventures in the Forgotten Realms, had to cover a bevy of Elves showing up in a bunch of odd colours. Midnight Hunt, however, should be a brisk in comparison.

As always, this review series is looking at cards from the point of view of Elf players across all formats. If a cool card that you love isn’t here, it’s probably just not relevant to Elves. It’s still a cool card though, whatever it is. We’ll go through each of the cards, discuss each of them and their applications and then give them a score out of five trees as usual.

Every once in a while, a Banisher Priest or a Fairgrounds Warden will show up in Elf sideboards as an answer to opposing creatures that we can’t get around otherwise. As those types of cards go, none can really hold a candle to Skyclave Apparition. However, If we’re looking for an option that only contains a single White Mana Pip, you can’t go too wrong with this new option.

We do need to be careful against opposing decks that can utilise Midnight Hunt‘s new Day/Night mechanic. If we play Brutal Cathar when it’s already Night, it enters as Moonrage Brute. If that happens, we have to wait until things flip back to the sunny side to get the effect we want. Luckily for us, Elves are very good at making Day again by casting multiple spells. Whenever we manage to do that, we even get to exile an additional creature, which is a nice bonus.

In the end, whether or not Brutal Cathar will make it into any Elvish sideboards depends entirely on how hard it is to get double White when we need it. If Brutal Cathar does make it, I welcome our new WerewElf friend to our ranks.

Just as with previous visits to Innistrad, another major theme of Midnight Hunt is Spirit Tribal. Not only do they get a new mechanic in Disturbed, there’s a new Spirit Lord that might get some people to try them in Standard. Thraben Exorcism is a purely sideboard card, of course, and a very niche one at that. However, if we need to combat Spirits in Standard while keeping options open for destroying Enchantments, it isn’t the worst card we could consider.

Outside of Standard, there isn’t any hope for Thraben Exorcism. Spirits is too small a metagame share of Modern and we have much better ways of killing Enchantments there.

What’s this doing here? Midnight Hunt brings a new boardwipe to the table and Elf players are running scared. This one feels almost targeted at Elves. Flood the board with Green dorks and BOOM, they’re all dead for two White mana.

In all seriousness, while this card seems good against us, it’ll only see play if the metagame ends up in a place where a deck like Elves is good. In formats where most decks will have around two creatures out on average, Vanquish the Horde is going to be beaten out by your normal four- and five-mana wraths. For Vanquish to see play, the format has to be geared towards decks like ours that spit out a bunch of creatures. That would be a good thing for Elves players.

Be careful, though. If you start dominating your local FNM with Elves, you might incentivise people including Vanquish just to beat you.

On Innistrad, in place of Elf Druids doing mystical things in the woods, we get Human Warlocks.

The reason I bring Saryth up is mostly for Standard applications. I’ve played Shalai, Voice of Plenty in Elves before, mostly for her defensive ability. Saryth can protect our creatures while letting us attack with any Elf Warrior tokens we have lying around. The untapping ability is also relevant in a format where we’re playing Circle of Dreams Druid.

Saryth isn’t going any further than Standard, but there’s enough utility here to get included there as a one-of.

Finally, we get to talk about the star of the show. Rite of Harmony is the one card of the set that’s really got Elf players talking. The comparisons to Glimpse of Nature were immediate. The comparison to Beck // Call were probably more apt.

I’ve had experience playing Beck in Modern and it’s never quite been good enough. Two mana for this effect feels drastically more than the single mana of Glimpse of Nature. There are some benefits here, however. Compared to Beck, Rite of Harmony is asking us to splash a colour that we’re more likely to already be playing. The Rite also works with tokens, which Glimpse doesn’t. Probably more importantly, Rite of Harmony is an instant and works with cards like Collected Company.

I’m very excited to try out Rite of Harmony in Modern as soon as possible. Green-White Elves have been doing well for me recently in Modern and I’m happy to get a new card to play with. I’m not expecting Rite of Harmony to be overpowered or broken in any way – Beck taught me not to be overoptimistic with this kind of card. However, I do think the card could fuel a new variant of Green-White Elves that combos off around the Rite.

If you decide to try Rite of Harmony out, please keep in mind that you need to be running a mana-heavy version of Elves, rather than an aggressive variant. Rite wants you to be able to put as many creatures into play as possible and every additional mana dork you have helps with that.

Five cards (one of which wasn’t even for us) and we’re done. I guess that’s what you’d expect for a set without Elves. Hopefully Innistrad: Crimson Vow will also give us some cards to discuss for this series. Maybe they’ll bring back the plane’s long dead Elves to fix this eminent eternal night problem? One can dream.

Catch us on stream in the near future for our Rite of Harmony testing and we’ll see you here for Crimson Vow.