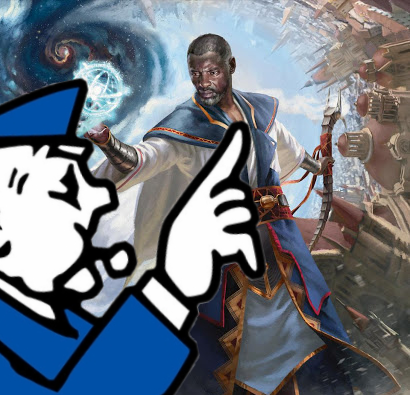 In an announcement I probably should have anticipated after last weekend’s Players Tour Finals and Historic Arena Open, a bunch of arguably overdue bans came out from Wizards today. With the data from the weekend finally giving them the push to take action on some universally reviled cards, let’s hope that these changes will finally help bring competitive Magic back to a healthy place. Without further ado, let’s jump into each of the formats covered by this announcement (plus a sneaky extra one).

Many people were discussing the possibility that Wizards were going to wait until the upcoming rotation to deal with Standard; Three of the four cards that received bans were slated to leave the format (Reclamation, Growth Spiral and Teferi). However, with the increased amount of Standard play taking place digitally through Magic Arena, Wizards have made the move to effectively rotate three cards early in an attempt to freshen up the format for the last month or so of play. This comes off the back of Wilderness Reclamation decks making up more than half of the metagame at the Players Tour Finals this past weekend and Growth Spiral appearing in a whopping 68% of that meta.

Included in these three ‘early rotations’ is Teferi, Time Raveler, a card that has plagued players since War of the Spark by removing their ability to interact with their opponent at instant speed. Teferi was arguably part of reason most decks were opting for linear plans with little direct interaction during the height the of the Lukka, Coppercoat Outcast/Fires of Invention deck’s romp through the format. It’s a shame in my eyes that an interesting time wizard character has got a really bad rep as being a “no fun allowed” sort due to his first two Standard-legal Planeswalker designs causing so many unfun games for players, but at least Wizards are now willing to consider the enjoyment of a format as a reason to remove something now that the game is reaching so many more people through Arena.

Cauldron Familiar also got the axe – a card that was not set to rotate next month. Wizards cites the Red-Black or Jund Sacrifice deck’s consistently high winrate, which stifles Aggressive and Midrange decks, and the large number of triggered abilities repeating each turn (an issue for digital play) as reasons for this ban. While I’m sure many players will miss the cat, I know a lot more players who will be happy to see it go. The other sacrifice synergies still seem strong enough to keep the deck around, but it will need to adapt.

Inverter of Truth is banned.

Kethis, the Hidden Hand is banned.

Pioneer also received four bannings and these are laser-focussed to deal with four specific combo decks that are the current top dogs in Pioneer. Wizards informs us that while none of the decks in question are doing too well by themselves, they contribute to a prevalence of Combo decks at the top of the metagame – which has been off-putting for many players who have tried the format. Wizards directly stated that the number of people opting to play Pioneer since the format’s inception had dropped off noticeably on Magic Online and this Banned & Restricted update aims to address that.

Many players and pros had talked about being disappointed by the previous update, which had left Pioneer almost untouched (with one minor unbanning), but hopefully this set of bans is better late than never and will reinvigorate players’ interest in the format.

Interesting to me is which part of each combo Wizards have opted to go after:

The Historic bans come from much of the same place as the Standard bans, especially for Teferi, Time Raveler. In a format where the interaction that Teferi is stopping is more powerful than Standard and the un-fun nature of his design is still a major issue, getting rid of him now will probably help a lot with player engagement with Historic – a format that is rapidly diverging away from its initial feel as ‘big standard’ and towards a new place with the addition of Jumpstart (and the soon-to-be Amonkhet Remastered).

With regards to Wilderness Reclamation, Wizards have cited “concerning win rates” when discussing the deck. They had hoped that losing Nexus of Fate would cut down on the Metagame percentage of Wilderness Reclamation, but it seems that the deck adjusted to rely on many of the same cards as it does in the Standard iteration, alongside Field of the Dead. The further out we get from the printing of this card that acts as a one-sided mana doubler, the more problematic it seems.

Some players have been calling for a ban on Muxus, Goblin Grandee due to the current flavour-of-the-month on Magic Arena being Goblin decks. However, Wizards have not addressed this in their announcement, so one has to assume they intend to see how the format settles going forward. Maybe the banning of Wilderness Reclamation and Teferi, Time Raveler will make it less bad to include more creature interaction to deal with Goblins now.

Wizards informed us that Teferi, Time Raveler was turning up in over 10% of Brawl games and had one of the highest win rates. As a result, he has also been removed from the format (where he could be played as your Commander), meaning that Teferi joins Oko, Thief of Crowns in being playable in basically none of the Arena modes. Three-mana Planeswalkers sure are hard to balance, huh?