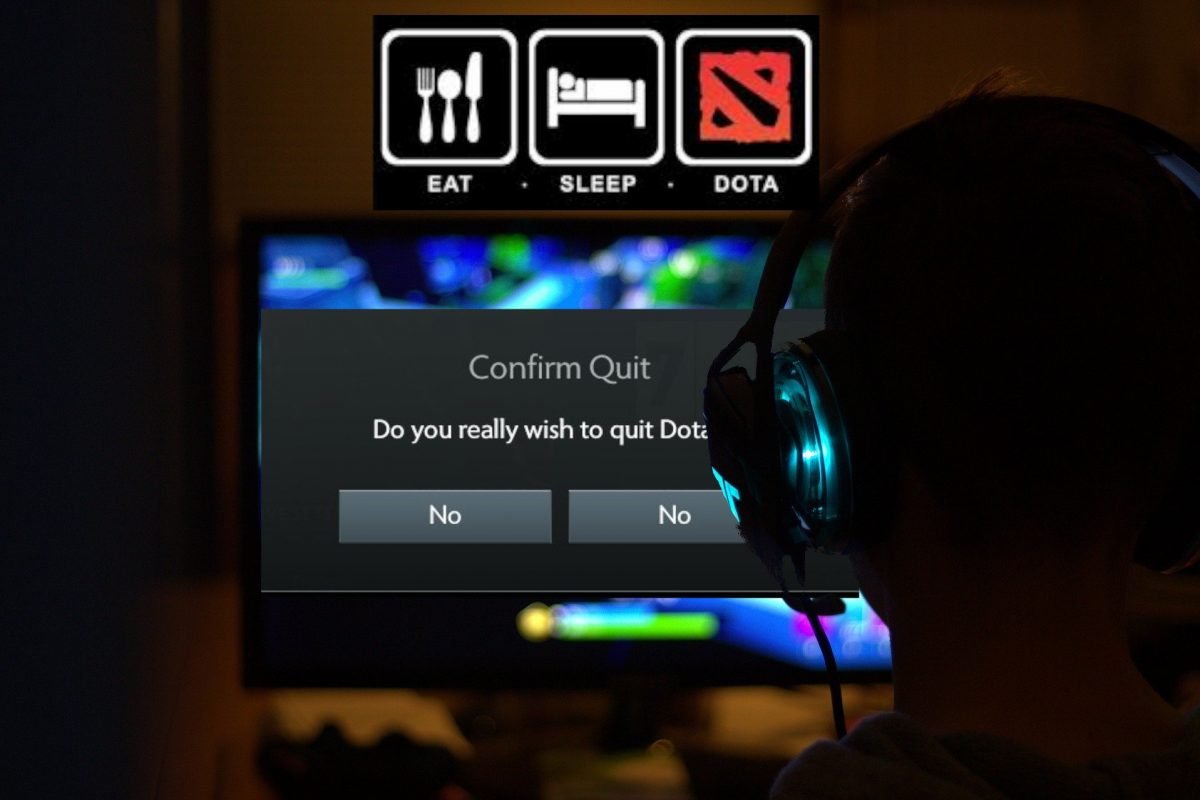 Having logged over 4500 hours in Dota 2, I quit cold-turkey 10 weeks ago. I had planned on simply taking a break from the game, but I’m now considering making that a more permanent change. I still think Dota 2 is a fantastic game, and I still intend to keep up with the scene, but expect I’ll transition into a spectator rather than a player. There are a few reasons for this, and whilst this is specific to Dota 2, I hope everyone can take something away from these points.

The things I played Dota for don’t happen often enough

I’ve been a gamer for most of my life, and as I get older the drive to be the best is fading. I no longer care about getting better at games. Spending countless hours improving a tiny area of my game is just not interesting to me anymore. Especially when I remember that, even with my improvement, there are still leagues of players better than me.

In the past few years my main enjoyment from games comes from what I call “wacky bullshit”. I’m interested in silly combos which only work 1 in 10 times. I want dumb strategies that go all-in on a clear victory condition. I crave the ridiculous moments where the stars align and you turn the game on its head in one play. Dota 2 is a great game in which these things could occur (especially in Ability Draft), but it’s also incredibly frustrating the 9 out of 10 times it doesn’t work (for any of a vast number of reasons). The issue is, when I don’t get the combo I want, or it doesn’t work as planned, I still have to play the game out. I become increasingly despondent at lacking the agency I wanted, which ensures the loss for my team. I could abandon, but this creates a different set of issues, assuming I want to keep playing the game.

Trying wacky bullshit in Dota is like rolling a d20, and unless you roll a 20, you’re going to have to spend an hour of your free “fun” time doing something you’re not really invested in. Whenever the strategy I want to try isn’t supported, which is most of the time, I still have to complete a “normal” game of Dota 2. If you enjoy standard Dota you’ll have no issue with that, but for me, standard Dota has little purpose if I’m not looking to improve, and I’m simply not interested in that any more.

Each game of Dota is a big time commitment

A match of Dota typically takes somewhere between 30 minutes and an hour at my skill bracket. Including queue and draft times, you can easily spend 80 minutes on a single game. That’s a lot of time for something you aren’t invested in. It’s possible that 2 games of Dota takes an entire evening of free fun time. Even ignoring the 10% success rate of wacky bullshit, this is still a significant investment. If you’re going to spend your entire evening only playing 2 games, you really want to enjoy those games.

Other games I’ve been playing recently only take a maximum of 20 minutes to complete a match. This makes it much easier to evaluate whether I’m enjoying myself, and step away from the game if I’m not. If I realise I’m not having fun, it’s likely only been an hour and I still have plenty of time to try something else.

It’s taken me such a long time to stop playing Dota because it’s difficult to evaluate whether you’re having fun after only 1 or 2 games:

“That one could have been particularly unlucky; every game has its bad matches after all.”

“Maybe I’m simply feeling off this evening and tomorrow will be different.”

“Maybe something else is really bothering me and I’m just using this loss to vent my frustration.”

Whatever the case, spending most of my free time playing something which didn’t make me feel “free” was causing me to become increasingly despondent with Dota. I also had to get over the “sunk-cost fallacy” to accept that spending nearly 5000 hours in something was not, in itself, a good enough reason to keep playing.

Perhaps the most obvious statement here: it’s not fun to lose. You can have fun losing, if your wacky bullshit works (even only partially) and you can still have fun being semi-successful with it. Dota is such a competitive and meta-dependent game that if your plan doesn’t work completely, it’s highly likely you’ll lose. You’ve spent some resources trying something weird, and any setback can tip the knife-edge balancing that Dota has. This is why these strategies are such a gamble in Dota, and why they’ll lose you 9 out of 10 games.

In Dota 2, winning is the only goal. Lots of games fall into this category, and can tie your enjoyment to the condition of winning if you’re not careful. Being meta- and balance-dependent, going “off-book” can ruin a game for your teammates and make your attempts at having fun even more punishing if they don’t work out. If you aren’t trying to win in Dota, there isn’t much else to do. Even the “wacky bullshit” aims to win, though in a weird way.

You can mitigate this slightly by playing with friends. If your entire team is trying the same crazy strategy, you can laugh about your attempts together. Plus, there is less concern about winning when you’ve all accepted the risk, and thus you’re not letting anyone down.

Finding joy in losing has been a huge change in how I experience games, and has caused a shift in the types of games I enjoy. There are plenty of games out there which aren’t quite as competitive, where losing doesn’t carry the same weight.For example, I’ve recently been playing a lot of Fall Guys and Rocket League due to the shorter match time and lower competitiveness – at least at my skill level. Alternatively, you can find (or even invent) personal objectives to enjoy the game regardless of the result. This is most obvious for me in board games; I enjoy developing my own strategy, and the points (and therefore winner) at the end of the game feel like more of a formality than an objective. I still build my strategy to gain points, but I’m not too concerned if my opponent’s strategy is more efficient (provided theirs isn’t “my strategy but better” – but that’s a different article).

Despite the incredible diversity that Dota presents, most games play out the same way from a wider angle. There are lots of individual decisions which affect the flow of a game, but they all go through the same formalities and actions. Plus, if these niche strategies become too reliable they become the meta and stop being wacky bullshit.

I suppose because I no longer care about getting better at Dota I feel a lack of agency within the game. I want to do my own thing, but there simply isn’t space within Dota to do that. Even with a team of friends, you still rely on a lot of other factors within Dota going your way. The very challenge and complexity which drew me to Dota is the same thing that is now turning me away.

I haven’t stopped playing Dota because Dota has changed, but because I’ve changed and how I enjoy games has changed. Being aware and accepting of these changes is an important part of life. While at the moment it only affects which games I play, I have learned a few things about myself thanks to this experience, and I’m sure it will help me process more significant changes in the future.