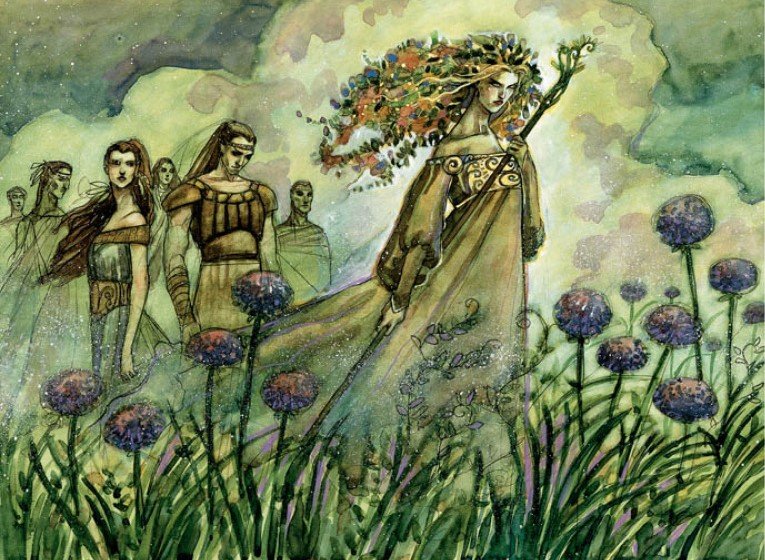 Welcome back to Elves All The Way Down, the Magic: The Gathering series about playing Elves in as many formats as possible. Last time, we tussled with Modern using a Green-White combo list. This time, we ventured into Pauper, the format where you’re only allowed to play cards printed at common.

Without the ability to play Rares and Uncommons, we don’t have access to our normal suite of lords and finishers. We get to keep our core of mana-elves to flood the board, but what can we field to actually finish the game?

Fortunately for us, Pauper has a bunch of cards that care about playing Elves, or the number of Elves in play. Lys Alana Huntmaster, Timberwatch Elf and Elvish Vanguard all turn our mass of Elf cards into more power on board, be it in the form of tokens, counters or temporary pumps.

Huntmaster also feeds the other wincons by increasing your Elf count. The additional tokens it generates make it easier to get an attack in, too. If even one of them goes unblocked, it makes the perfect target for a Timberwatch activation.

It’s also worth mentioning Gruesome Fate and Wellwisher here. Gruesome Fate is only a one-of in the deck, but it kills our opponent without even going to combat. We can only make the Black mana it requires with Birchlore Rangers, but with only one copy, that isn’t really an issue. This slot could be filled by Mob Justice, but Gruesome Fate specifically gets around Prismatic Strands, a card that could otherwise ruin our day.

Wellwisher doesn’t exactly win us the game on the spot when we activate it, but against some decks in the Pauper metagame, an active Wellwisher can put us completely out of reach. If a deck is trying to beat us through combat or pointing Lightning Bolts at our face, gaining a big chunk of life a few times is effectively Game Over in our favour.

Here we have the usual suspects: one mana 1/1s that tap for G. Pauper has access to all three versions of this card. Here, we run a mix of them in order to make things harder for Echoing Decay.

Birchlore Rangers and Quirion Ranger are familiar to anyone who has played Legacy Elves. Birchlore Rangers are an auto-include because they generate mana from our Elves that can’t make it themselves. They also give us access to non-Green mana for our off-colour spells. What’s even better is that the ability on Birchlore Rangers is similar to Heritage Druid, which we were playing in Modern. We can tap Elves to use the ability even if they’ve just entered the battlefield. Often, that’s enough mana to put our entire hand into play.

Quirion Ranger might not make mana by itself, but it untaps Elves that can. Also, in land-light hands, picking up a Forest and replaying it as our land for turn gives us access to an additional mana if we didn’t have a spare land already. The Ranger also has synergy with our wincons: untapping Timberwatch Elf and Wellwisher gives us additional activations.

Priest of Titania is Pauper’s equivalent of Elvish Archdruid. Having a two-drop Elf that can make multiple mana enables truly explosive starts. (Especially when untapping it with a Quirion Ranger.) To be honest, I’d play Priest of Titania in Modern Combo Elves builds if I could. While the more beatdown-oriented build of the deck really loves the Lord effect, being one mana cheaper is a huge deal.

Now, if we were just playing Elves with no support cards, we’d probably have our entire hand in play by turn two or three… And be out of cards in hand to follow up. To avoid this, we need to play some spells that can refill our hand and keep the Elfball rolling.

For this purpose, we play Lead the Stampede and Distant Melody. Some builds also opt for Winding Way, but there’s only space in the deck for two of these options.

Generally speaking, Lead the Stampede and Distant Melody fill the same utility slot in the deck. However, Melody opens up the possibility to draw the majority of our deck when things are going our way. It can also help us dig for important sideboard cards. Lead the Stampede, on the other hand, can only find them if they also happen to be creatures.

While I won’t go into every card in the sideboard as that would require an overview of the entire Pauper Metagame, there are two cards I would like to address.

Hydroblast seems like a strange include in our deck and Spidersilk Armor is just a strange card in general, so why are we playing them? Well, the card we are the most scared of in this format is Electrickery. There aren’t many sweepers in Pauper, but this one is one-sided and at instant speed. A well-timed Electrickery can wipe our entire board, letting our opponent use their spot removal on the few Elves that survive.

What helps Spidersilk Armor even more is that a lot of the tempo decks in the format are trying to kill us with a 3/3 flyer and some 1/1 friends. Turning all of our Elves into at least 1/2 creatures with reach makes it very hard for those decks to punch through.

Let’s get straight the point: the games did not go well. Essentially, we played against three copies of Blue-Black Tempo and a near fourth copy in Blue-Red Tempo. At least we managed to get our revenge on Blue-Black right at the end. Worse still, the only other deck we encountered was Black-White Pestilence; probably our worst matchup in the metagame. (No, it didn’t end well).

Despite how badly things went, I know Elves are viable in Pauper. So our record here tells us more about the spread of other archetypes in the meta than about the Elves themselves. We didn’t really get a good cross-section of decks to find out what different matchups are like. I hope that, when we return to Pauper, we get a wider spread of matchups to really showcase what the deck can do.

When we next come back to Pauper, I’d like to break out an old Land Grant variant of the deck and push our land count as low as it can go. I certainly hope we can do better than we did this time around.

As for next episode, we’ll be going over our first revisit of a format – Historic – with an updated Combo Elves list and a more aggressive Beatdown variant. See you then.