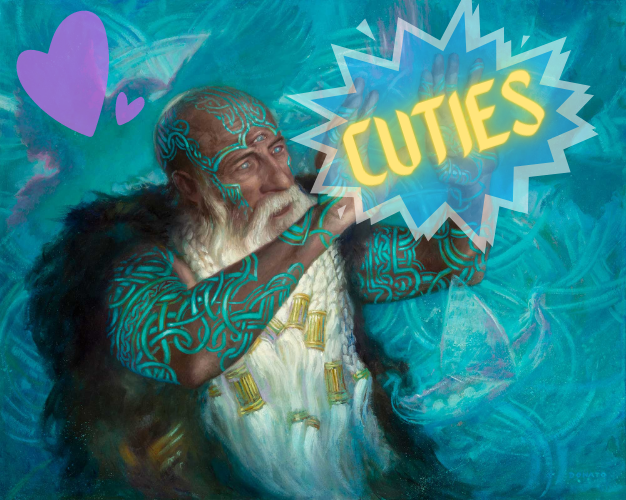 Gather round, young and old, for here’s a tale freshly told: Magic: The Gathering is off to Norse-land! The new set promises Viking-inspired sagas and ten whole realms to explore. What better way to mark the occasion than by introducing our cutest new friends from Kaldheim?

Lore-lovers and art-fanciers alike are in for a treat, because Kaldheim has its own series of showcase art treatments. To match the Norse theming, the special versions have their own frame, styled after the interlace designs found in Viking art.

But the resemblance is more than skin deep: read on to get a glimpse into the impressive world-building behind Magic’s latest plane. Because while the cuties are hogging the limelight here –out there? –there are sure to be dragons.

In Magic, even cuties have rules

If you were with us for the Zendikar leg of the trip, you know the drill:

Just so you know, Koma isn’t a snake…

I specifically said no humanoids!
Also wow, that flavour text.

I guess, but look how cute he is!

But you don’t have to be good to be cute?

…Congratulations to our Honourable Cutie of Kaldheim, Infernal Pet!

Now, not all of the cutest creatures live on creature cards, especially with all the rune-magic and seidr going on in Kaldheim.

(Although they weren’t cute enough to make the list, it’s worth checking out the art on Kaldheim’s Saga cards. See if you can tell which ones were actually carved in wood!)

Before we dive into the top ten creatures, I’ve rounded up the three cutest non-creature spells from Kaldheim. I think you’ll agree they’re too lovely to exclude.

3. Wings of the Cosmos

“Argh, why am I doing this? Did you know we could fly?” I love how the rest of the pack is posed like a Renaissance tableau, with each wolf frozen in its best reaction pose. Bonus points for the wolf pups hiding at the edges.

2. In Search of Greatness

In Search of Greatness offers two cuties for the price of one. Toski and Sarulf (of Realm Eater fame) are definitely up to something here. It’s all a bit troubling: should this make me feel kinder towards Sarulf, or suspicious of Toski with his wee Viking braids?

If the glowing fluff-balls in the normal art are ‘how I think I look in the morning’, the showcase Viking art is more ‘WHO DARES DISTURB MY SLUMBER?!’ Raoul Vitale has also contributed this very fluffy cat token to match the draught cats.

Esika is the god of the World Tree, with a chariot based on Freya’s one from OG Norse mythology. I like to think we’re seeing Esika’s viewpoint as she despairs of getting the cats out of the chariot so she can get back on the road.

We’re calling it the Catmobile, sorry.

The Big Ten: all the cutest creatures in Kaldheim

The results are in! By which I mean “I made a spreadsheet.” Buckle up for a whistle-stop tour of the cutest creatures we’ll be meeting on our trip to Kaldheim.

Sounds suspiciously like ‘spirit of the elder god’, so possibly not cute in the scheme of things, but certainly bear-like. Its home, the Aldergard Forest, boasts scenic spots such as “The Cursed Tree, a massive oak that is perpetually covered in snow” and “The Skelle Mire, a dreary swamp”. No wonder he looks miffed.

You know a list is good when it starts with a bear!

Wings? Four. Antlers? You bet. Talons? Fabulous. I initially thought the goldspan part referred to its wings, which are very much not gold. On closer inspection, the dragon is guarding the span of an ornate golden bridge. Probably helps deter tourists.

The most likely location for the bridge is Axgard, since the dwarves managed to build their city on top of an inexhaustible lake of molten gold, which they use like concrete.

I’m a fan of tiny dragons, but this certainly isn’t the cutest example, so it’s down at #9.

“Awoo”. From the background, our pup could be living among the Tuskeri, a boastful tribe of red-flavoured humans.

Is that a pile of curse-sticks he’s guarding? Has he been taught to play fetch with short stories? Wizards, if you want Fearless Pup to top this list, these are the questions you need to be answering.

Not that kind of raptor. This battlefield bird won me over with its rad composition and filigreed wings. At a glance, the armour could be mistaken for barred feathers; on closer inspection, it looks like beaten gold inlaid with rubies.

I’m no ornithologist, but I do know eagles are a type of raptor, which leads me to think this feathered friend might be aligned with Halvar, the white-flavoured god of battle. Conveniently, he was found as a baby in the nest of a giant eagle, so perhaps this is a long-lost nestmate. Either way, be glad the raptor has your back.

(FYI, pseudo-Odin-god Alrund spotted baby Halvar in the nest, named him, then left him to be raised by dwarves for twenty years because he had other stuff going on. I have a lot of time for Halvar.)

You know how reindeer look really cool as mounts but always require a six-month scavenger hunt and a severed head to unlock? What I’m saying is, don’t mess with Boreal Outrider.

From a lore perspective, the elves of Kaldheim are a particularly hardy bunch (read not to be messed with). They survived losing a war against the current gods, being kicked out of the pantheon, and even having their race cut in half with a magical axe* (that’s why some are Green-aligned tree-dwellers and others Black-aligned tunnel-dwellers.)

It takes otherwordly resilience to wake up every morning and decide to stay in the forest realm where your former leaders are eternally imprisoned in trees. The scenery is pretty nice, to be fair.

*Surprise! This one’s on Halvar.

I don’t think this stone-cold badass cares what you call it. The flavour text refers to the Beskir, a white-flavoured tribe of humans working to bring peace to Bretagard (the human realm). I like to think she has a Robin Hood pilfering situation going on, whereby her controller benefits from her canny ways.

The best ratter in the ten realms, depicted here chilling in the rafters of the Gods’ Hall in Istfell. All the souls of animals end up in Istfell, so this cat probably has its work cut out.

Funnily enough, the gods surrounded Istfell with a river-moat and a stonking great wall specifically to keep the cosmos monsters from getting in and nibbling the roots of the World Tree. Was the Guardian too cute to keep out?

It’s a magical owl (yes, and a cosmos monster.) What were you expecting at this point?

Bonus points for the showcase art, which manages to look metal as all Hel without losing the fluffy owl texture. I think that’s what makes me look at a winged predator with a revolving head and go ‘awwww!’

Cutie with a prosthetic arm and a mystical scroll-tail. Will keep your secrets super safe on account of being unable to talk.* Apparently he communicates telepathically with Esika, god of the World Tree… So why is his tail covered in writing? Does he have trouble remembering the secrets?

Despite his diminutive size, Toski is actually one of the cosmos monsters –you know, like the world-eating serpent Koma. So that’s a bit less cute.

*Except that one time Alrund beat him up and took his secrets for some epic quest chain.**

**Yes, Alrund was busy punching the secrets out of cosmos monsters when he could have been raising Halvar.

Wait, number 2? What did you think was cuter than Toski?!

Tally-ho! Look at the face on that charger! Who else will carry you so joyfully into battle, in that getup?

Surprising nobody, the dwarves brought the cutest cavalry to the cosmic battle.* You’d be mad not to. This goat is having the time of its life, and you’re going to love hearing about it at the afterlife-party in Istfell. Somebody get this hero a drink.

*Did I mention dwarves are cool? Their currency is iron, which is both metal and something of a flex.

Oh, what stories will be told! This set is one for the skalds. We can’t wait to get our hands on pre-release packs, but in the meantime you can find all your new friends on Arena.