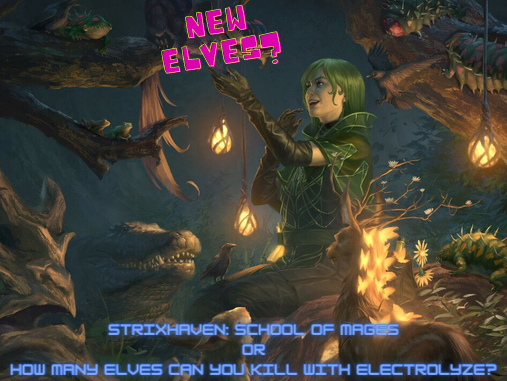 Welcome to Strixhaven, Magic The Gathering‘s take on Wizard School. This set introduces new takes on five of Magic’s two-colour combinations in the form of Strixhaven’s colleges. Each college specialises in a different way to study Magic, so the set has a heavy Instant-and-Sorcery theme. Here at Elves All The Way Down, a new set means new cards to review, so let’s get to them.

As always, I’ll be giving each card a rating out of five, shown at the end of that card’s entry.

Our first new tool isn’t an Elf, but gets to join the list of useful utility creatures that we often include in sideboards. Sometimes we just need to make our opponent not have a graveyard anymore. Callous Bloodmage is one of the best versions of this effect we’ve seen. When you don’t need to exile a graveyard, there are two other options you can choose from. To top it off, we can find him using Collected Company in Historic, Pioneer and Modern. Callous Bloodmage is a great addition to Green-Black Elf sideboards in multiple formats.

The first Elf of the set is a bit of dud. Accomplished Alchemist might be a mana dork, but a four-drop mana dork needs to do a lot of work. It does makes me want to try a life-gain focused version of Elves with Essence Warden and some untap effects. However, most Elf decks aren’t running enough life-gain to make this card into anything more than an overcosted and over-statted Paradise Druid.

Now here’s the card in the set that I’m most excited to talk about. I fully understand that Ecological Appreciation won’t be replacing powerhouse cards like Collected Company or Chord of Calling anytime soon. But the sheer flexibility and power ceiling of this new card make it interesting to build around and try out. I’m a sucker for cards like this: Gifts Ungiven is one of my favourite cards of all time. Digging around for cool cards to include as a single copy to power up a card like Ecological Appreciation is always fun.

We’ve already had the chance to play this card on stream (over on Twitch) and it was more impressive than I expected. The best four card pile so far has been Shaman of the Pack, Skemfar Shadowsage, Elvish Harbinger and Sylvan Messenger.

Even though it won’t be making the cut in the most competitive Elf decks going forward, it’ll be a fun option to have.

Here’s the first of Strixhaven’s limited-focused Elf cards. Karok Wrangler is great in draft, but that’s where it’ll stay. Unfortunately, Elf decks are poorly positioned to take advantage of an ability that cares about casting multiple instants and/or sorceries.

Another limited card, so there’s not much to say here. It is interesting that power/toughness doubling effects work really well with lords, at least. Chameleon Colossus this is not.

Kianna is an Elf Druid, but that’s all she’s really got going on. At three mana, you want a creature to do more than maybe draw you a land. The late game mana-sink to make Fractals is a nice place to put excess mana, but we can do better in the three-drop slot.

If Kianne was good enough to include in our decks, it would at least be fun that we also had a Bird Wizard we could sometimes play. However, I can’t come up with a theory with enough substance about an Elf deck that would want to include Kianne or Imbraham.

Witherbloom Command is an interesting, cheap utility spell. Unfortunately, the sorcery speed really kills it. Had the command been an instant, allowing for the -3/-1 mode to be used in combat while destroying a Chalice of the Void, maybe it would have had a chance. Similarly, if the destruction mode could hit permanents that cost three, like Ensnaring Bridge, that might have been good. However, the actual card doesn’t do enough to warrant trying over cards like Abrupt Decay or Assassin’s Trophy. This limits Witherbloom Command’s utility to the format where those two cards aren’t available: Standard. Elves aren’t doing great in Standard with only one set of real support, but if the upcoming D&D set gives us enough new tools to play with, Witherbloom Command might be an interesting sideboard card.

The Snarls add to the growing selection of of enemy-colour duals we have access to in Standard and Historic. While they’re probably not out-competing their fastland equivalents, they are a big boon to Standard. Let’s hope for some more Black Elves we want to cast using this to join Skemfar Shadowsage and Harald in the D&D set. Drow anyone?

Strixhaven also brought a swathe of powerful reprints to the Historic format in the form of Mystical Archive cards. Unfortunately for us Elves players, all of the Archive cards are instants or sorceries, so we don’t gain any old Elves. The only card that Elves have played historically – Natural Order – they preemptively banned. What’s worse is that a lot of them are powerful removal spells. If you’ve never had two mana dorks Electrolyzed, you’ve lived a blessed life. What this has effectively done is increase the power of the Historic format as a whole, without adding anything to Elves. As a result, Elves now feel much worse off. At least we get Krosan Grip, Inquisition of Kozilek and Weather the Storm for potential use in the sideboard.

They even included two boardwipes to really drive the point home.

That’s everything we’ve got to cover from Strixhaven. We’ll have to see what Modern Horizons 2 brings to the table when it rolls around. In the meantime, we’ll be doing a retrospective on the effect Kaldheim has had on Elves.