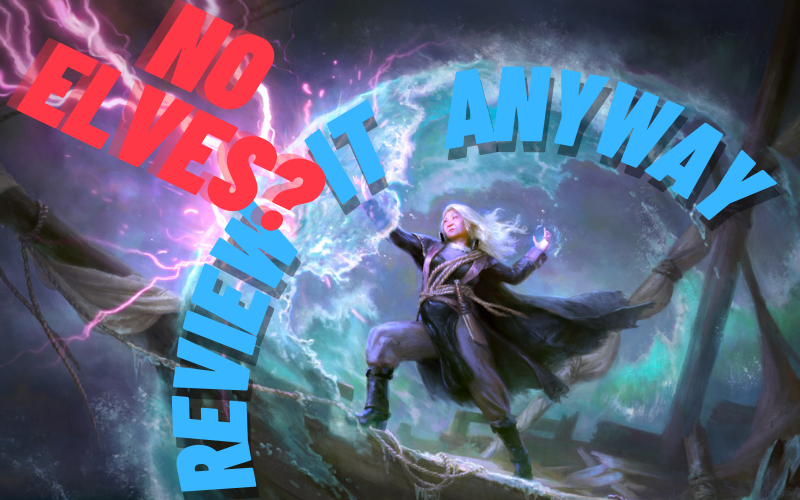 Magic the Gathering’s foray into the world of Innistrad continues. Last time, the focus was on Werewolves, but now it moves to Vampires in Crimson Vow. There’s a cool vampire wedding going on and all the most important spooks and monsters on Innistrad will be attending. Well, other than everyone’s favourite Big Frog.

Unfortunately for us, that means we’re still on a plane without Elves. We’re going to have to do our best to find some hidden gems here that could help Elves out, but we don’t have too much to work with. The previous review, for Innistrad: Midnight Hunt, also had to deal with a lack of Elves and there were still a few cards to talk about.

As is the norm at this point, we’ll be exclusively looking at cards in the context of their usefulness to Elves decks. So if a cool card for your Zombie tribal EDH deck isn’t covered, now you know why. Normally we cover cards for a variety of formats, but today’s review will mostly focus on Standard. Our score is always out of five trees, shown at the end of each card’s entry. The actual discussion of the card is more important than the score, so keep that in mind.

For once, I’m not including a boardwipe to complain about it. By Invitation Only provides us with a very interesting option when playing a deck that goes really wide. In a Creature-based matchup, as long as we have more Creatures than our opponent, we can remove all of theirs and leave ourselves with our best ones. Due to the fact that Elvish Warmaster and Tyvar Kell are around, we have plenty of disposable tokens sitting around. With this card, we can trade those tokens for our opponent’s entire board.

As with a lot of cards in this review, this is a sideboard option. We got to test it out against Green-White lifegain and it was quite effective. We managed to kill five of our opponent’s creatures and were still left with an impressive board afterwards.

I’ve heard that Elves likes filling the board with a bunch of creatures. I’ve also heard that there are some pretty good Aggro decks running around in Standard right now. If you need a sideboard card that can kill a creature and gain you a life cushion, Lantern Flare is here for you. You don’t even need to be able to play the Cleave cost here: Elves generally have enough creatures that it won’t be necessary. However, Jaspera Sentinel gives you access to Red mana just in case.

Anyway, a sideboard option for Standard, but not really relevant beyond that.

Here’s a cool reprint from Fate Reforged. Valorous Stance is a flexible card that lines up well against some specific threats in Standard while also being able to protect your creatures. Need to kill a Smoldering Egg or Goldspan Dragon, two of the most important threats in Standard? Need to save your Warmaster from an Infernal Grasp?

Again, it’s relegated to the sideboard, but it’s a very powerful option to have there.

I really like Welcoming Vampire. Getting some card draw from what we’re doing already is really good. Unfortunately for the Vampire, it will always be in a Standard environment with Rite of Harmony. As a result, we won’t ever be left wanting for card draw in Green-White.

I do like the idea of Collected Companying into two of these, but that feels like a thing for a Company deck, not Elves.

I guess we won’t be Welcoming this Vampire into our deck.

Here is the one card from Crimson Vow that might do well in Elves beyond the formats available on Magic Arena. Cemetery Gatekeeper is a really interesting sideboard card for beating decks that like to do a lot of one specific thing. Amulet Titan putting lands into play over and over? Eat a fetchland with Gatekeeper. Storm casting a bunch of Instants or Sorceries? Eat a Past in Flames. Bonus points because that has Flashback.

Cemetery Gatekeeper effectively acts as a customisable hate piece that you can use to fight against a wide variety of decks. Fetching one of these up with a Chord of Calling or Collected Company to beat whatever you’re playing against will be a useful new tool for Modern Elves. Just be careful if you ever have to set it on Creatures – it’s a symmetrical effect.

Another member of the ‘Cemetery’ cycle, this good boy also acts as repeated Graveyard hate. The benefit we get in exchange is a cost reduction that could potentially help Elves go off in one turn.

However, if we wanted to make the most of this effect, we would need to get a creature into the Graveyard, exile it with our three-drop and then play some Elves that could benefit from being one mana cheaper. This feels too slow for us, to be honest. Cemetery Gatekeeper is probably best in a midrange shell.

I’d love for there to be a Combo Elves variant in Standard utilising the Prowler to make things cheaper, First Day of Class to give our Mana Dorks haste and Rite of Harmony and/or Realmwalker to keep the cards flowing. Unfortunately, the pieces just aren’t there. We don’t have enough Mana Dorks, and using a card like Tyvar Kell to make all of our Elves tap for mana adds another moving piece that we have to get into play to make the deck work. Worse, Tyvar only provides Black mana, when the colour we need the most is Green.

All in all, Cemetery Prowler had me hopeful for a janky Combo Elves deck, but having looked at the rest of Standard, I’m just disappointed.

Glorious Sunrise brings an end to the story arc that played out across Midnight Hunt and Crimson Vow. It also brings us a much needed backup win condition for Standard Elves for when we don’t have an Elvish Warmaster in play. This is mostly only relevant for Mono-Green decks that don’t want to splash Black for Skemfar Shadowsage.

That’s just the first mode of the card. Glorious Sunrise also brings three other options that you can select over many turns. As a result, it’s rather good at grinding out longer games. A card draw here, a bit more ramp there… Even the lifegain mode can be useful if you need to survive some turns against flying creatures or burn spells.

We actually got to test Glorious Sunrise during our first Crimson Vow stream over on our Twitch Channel. It performed better than I expected, with all four modes coming up at one time or another. The ramp mode interacted especially well with Sculptor of Winter for a really big boost in mana. They even stack well together for more mass-pump or more card draw or a mix of whatever you need.

Crimson Vow provides us with a second potential win condition. Ulvenwald Oddity itself doesn’t really do much for us, but once it’s transformed…

…it does an interesting Craterhoof Behemoth impression. A board-wide pump effect that also provides Trample is really powerful for us. Ulvenwald Behemoth even provides Haste to our other creatures. This could be helpful for our Mana Dorks…if it didn’t take eleven mana to obtain this effect.

That’s the big problem with this card. Eleven mana to get the effect we want is a lot. If Ulvenwald Behemoth were a seven-mana creature we could just cast without having to go via Ulvenwald Oddity, I’d be a lot more excited about it. I realise the fact that you get the card in two stages probably makes it better for your normal Midrange deck in Standard because the front side is much more of what you want there. However, for Elves, we want to go big or go home. A big, dumb 4/4 creature just doesn’t cut it for us.

The Oddity was another card we had the chance to try out on stream and this one didn’t perform as well. I was worried that we’d never get to transform one and that’s exactly how things went down. Every time we had an Oddity in play, it didn’t do much and then died before it ever got to become the Behemoth.

All that being said, I’m a little sad about Ulvenwald Behemoth. Innistrad is the plane that gave us the best Behemoth ever, after all.

Hey, do you want to play Green-Black Elves in Standard? Well, here’s the land for you. There isn’t too much to say here: Deathcap Glade is just an improvement on the available manabase for Green-Black decks. It pushes out Necroblossom Snarl and joins Darkbore Pathway // Slitherbore Pathway to make a pretty robust manabase for the deck.

I’m really glad that Crimson Vow completed the Land cycle WotC started in Midnight Hunt. This time, we didn’t have to wait years for the Green-Black version of a Land cycle we wanted.

Mana is always important, even if it’s not the most interesting addition to the set, so it always scores well in these reviews. This time is no different. Deathcap Glade might be one of the most important cards for us in Crimson Vow.

So that was Crimson Vow. Despite the lack of Elves, I enjoyed our visit. We still had a bunch of cards worth talking about and I’m particularly looking forward to seeing how Cemetery Gatekeeper will play in Modern.

Unfortunately, this isn’t the end of the Elf drought in Standard. Next up, we’re visiting Kamigawa, a plane that has replaced Elves with Snake people. Original Kamigawa did give us Glimpse of Nature, so there’s still hope for something good to come of our visit. Cyber Ninjas don’t really mesh with our nature-loving, tree-hugging vibe though.

Catch us on stream trying out these new cards and we’ll see you here for Kamigawa: Neon Dynasty.