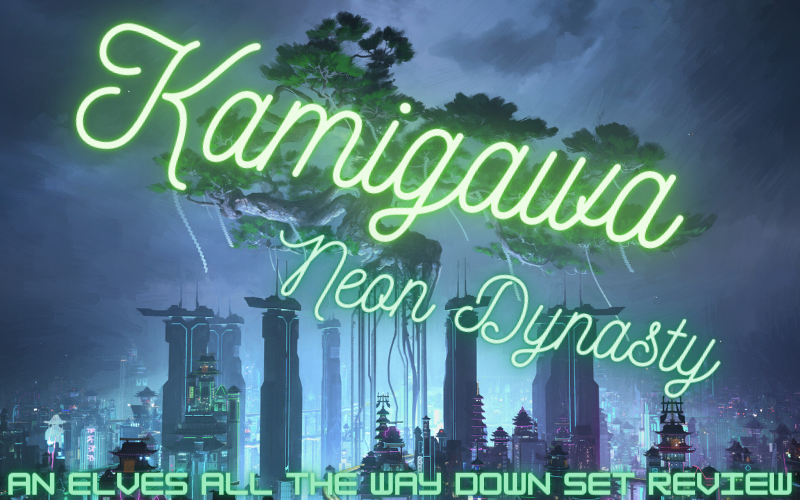 Years ago, Magic: The Gathering visited the Japanese-inspired plane of Kamigawa. The plane brought a swathe of bizarre and beautiful cards, but the set performed poorly financially. As a result, we were told that we wouldn’t be seeing the plane again unless something major changed.

Well, something major must have changed because we’ve finally made it back to Kamigawa. Not only has a good amount of time passed for us, but it’s been over a millenium for the people of Kamigawa themselves. A lot has happened to the world while we’ve been gone and 1200 years of advancement has effectively allowed them to skip past all the other settings in Magic technologically.

This probably isn’t a good sign for our favourite Green friends. Not only are there no Elves on Kamigawa, but they don’t tend to work well alongside mechs and hoverbikes. Maybe we can go hug some cyber-trees or something? I had some hopes that we might get a card on par with the best thing we got from original Kamigawa: Glimpse of Nature. Those hopes might have been fulfilled, but you’ll have to wait for the last card on the list for that.

As always, this review focuses exclusively on a card’s application in Elves decks across Magic‘s many formats. If you think there’s a cool card for your tribal Samurai deck, this isn’t the review for that. (That card’s still cool though, whatever it is, and so are you.) The rating given at the end of each entry is out of five Trees and applies to whichever format the card suits best.

Jugan Defends the Temple // Remnant of the Rising Star

There has been some interesting discussion around how powerful Remnant of the Rising Star would be alongside all of the extra bodies and mana that Elves can generate. Furthermore, the Warrior build of Elves massively benefits from +1/+1 counter synergies.

Unfortunately, we need to talk about the setup cost…

You see, the powerful effects of this card are hidden beyond a bit of a paywall. You have to pay in mana and time. When you initially play Jugan Defends the Temple, all you get is a 1/1 mana dork that isn’t even an Elf. The second stage is pretty handy, especially if you have counter synergies. However, to get to the face of the card you’re really after, you need to wait two turns. Two turns is a lot in a game of Magic.

As a result, this powerful card probably won’t impact older formats. I could see it finding use as a mana-sink in more restricted formats. Standard Elves mostly has Elvish Warmaster in that role and Remnant gives a permanent bonus for longer and grindier games.

A lot of people have been talking down March of Burgeoning Life, and for good reason. It’s quite apparent that the card was balanced to avoid making another Chord of Calling or Green Sun’s Zenith. Sadly, it was tweaked into near unplayability. However, when I saw it, I only wanted to do one thing: cast it targeting a Shaman of the Pack.

So, for our first Kamigawa: Neon Dynasty stream, we tried our best. Maybe we should have started easy in Pioneer, but we chose the more difficult environment of Modern. Across the entire stream, we never got to resolve a March. The one time we went to put it on the stack, our opponent conceded before we finished paying for it. Obviously, this shows how powerful the card is with its 100% success rate.

The fact that we sideboarded out all four copies in every round is probably a bad sign.

If you’re looking for a way of picking off a utility creature or planeswalker, you can do a lot worse than Master’s Rebuke. It’s the cheapest variant of this effect you’re going to get, especially as an instant.

Rebuke pales in comparison to cards like Dismember or Assassin’s Trophy. In formats or colour combinations without access to those, however, Rebuke is an interesting sideboard option to know about.

There’s been a decent amount of talk around Tamiyo’s Safekeeping‘s utility in combo variants of Elves. It joins a suite of protection spells that previously included Blossoming Defense and Heroic Intervention. Each option has its pros and cons. Safekeeping excels in cheapness and providing full protection to a single creature. This is ideal for protecting part of a combo.

If you want to protect your whole board when playing Green-Black Elves, stick to something like Heroic Intervention. If you want to keep your Devoted Druid alive so you can combo off, give Tamiyo’s Safekeeping a try.

Finally, we get to the card that saves the entire set for us.

While we were gone from Kamigawa, Boseiju got a facelift. The old Boseiju was good at protecting one important spell in decks like Sneak and Show. The new Boseiju has a much wider range of applications:

If yes, this all-new Boseiju is for you.

Boseiju, Who Endures also has a very important fourth mode. It can tap for a Green mana on turn one. So many utility lands either enter tapped or make colourless mana. Instead, Boseiju’s downside is that it’s Legendary. This is greatly offset by being able to use additional copies as removal.

Further to all this, the removal mode on Boseiju is very difficult to stop. The fact that it’s an ability, rather than a spell, means that the majority of counterspells don’t interact with it. It also get around Protection from Green because Boseiju itself is actually colourless. Just be careful; this effect isn’t Ghost Quarter. Your opponent can fetch Dual Lands with it, so it’s very difficult to colour-screw them by using it.

You even get to be a little bit tricksy with it in Elves. Alongside another recent Legendary land, Yavimaya, Cradle of Growth and Quirion Ranger, you get to play Boseiju early and turn it into a removal spell later.

All of this utility on a land that you can just use right away when you need to makes this new Boseiju an extremely desirable card. It slots straight into every single Elves deck without question. The first copy is effectively free because the Legendary drawback only hits when you draw two. I’ll be running 2+ copies in most of my decks whenever I don’t need a four-colour manabase.

The Future is Bright

Kamigawa: Neon Dynasty may not have given us Glimpse of Nature 2.0. However, giving us a powerful utility land that slots into almost any build is probably better, so I can’t really complain. I’m really looking forward to seeing how this release impacts my preferred formats like Modern and Legacy.

Catch us on stream trying out these new cards and we’ll see you here for Streets of New Capenna.