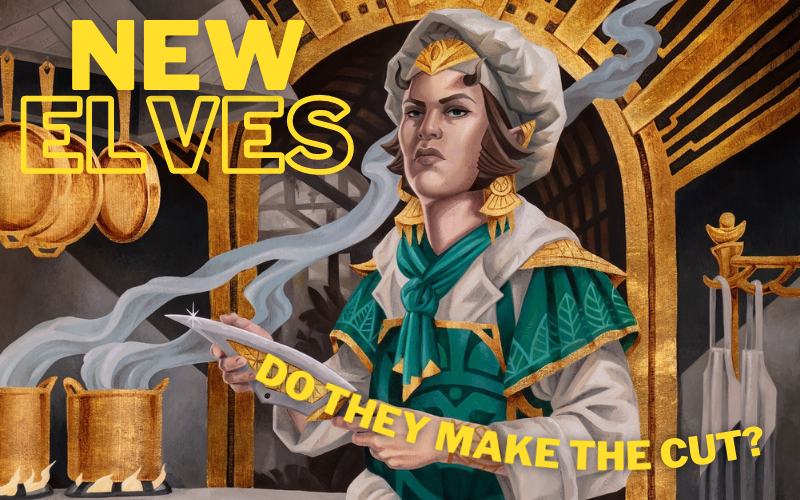 The latest Magic the Gathering set has released and this time, we’re visiting a Roaring Twenties-inspired city called New Capenna. Five Demon crime families rule the city. Each family has its own speciality, but one is of specific importance to us: the Cabaretti.

The Cabaretti family are known for throwing extravagent parties and galas. These gatherings don’t stop as long as the Cabaretti keep the food, entertainment and Halo flowing. And who can you find amongst the hosts and guests running and enjoying the festivities? That’s right, there are finally some new Elves!

Here on Elves All The Way Down, we’ve been lamenting the Elf drought over the past few sets. While Kamigawa and Innistrad are great planes, they are majorly lacking in the pointy ear department. So you can imagine how much of a pleasant surprise it was when they first showed that Elves would be appearing in New Capenna.

As always, this review focuses exclusively on a card’s application in Elves decks across Magic‘s many formats. If you think there’s a cool card for your The Godfather themed Commander deck, this isn’t the review for that. (That card’s still cool though, whatever it is.) The rating given at the end of each entry is out of five Trees and applies to whichever format the card suits best.

Let’s see what New Capenna has in store for our pointy-eared friends.

Our first Elf is rather glamorous, but is unfortunately balanced around being a draft common. A creature that grows for every other Elf we play can be very powerful, but Pauper Elves already have Elvish Vanguard and this new card really isn’t costed for constructed. As a result, we’ll have to leave her on the dance floor. She does have a cool dress? coat? scarf? shawl? though.

I really like what’s going on with Rumor Gatherer. All the card asks you to do is what you’re already doing in Elves: playing more Elves. In return, you get card selection and card draw.

Unfortunately, two White pips is a very big ask in decks that are 99% Green. There might be a place in a Standard deck that’s more focused on two- or three-colour cards with a manabase to reflect it. Being a 2/1 also doesn’t help. That’s a very fragile body for a harder to cast three-drop. I do like that you can find this off Collected Company and immediately scry off the other creature (or draw if it’s something like Dwynen’s Elite).

I’ll definitely be trying Rumor Gatherer out in Commander, where there’s maybe enough time to get the mana cost problem solved. We might even try in Standard as well, when we give Naya/Cabaretti Elves a go.

I feel like Attended Socialite could have found a home in Green-based aggro decks of yesteryear. In 2022, however, there really isn’t enough going on here. I do like how you can get in for some good chunks of damage if you play 2+ creatures in a turn.

I do kind of want to try out the Socialite alongside Elven Ambush in Standard. Casting Ambush after blocks will result in a lot of damage (when not blocked) or a dead blocker.

Again, Pauper Elves already have Elvish Vanguard. Otherwise, Attended Socialite might have found a home there.

Elegant Entourage falls prey to being balanced around limited. The effect is useful and Alliance is something we can easily trigger, but if we’re paying four mana, we need it to be effectively winning us the game. It has overperformed for me in Streets of New Capenna limited, though.

Notably, it’s yet another card that synergises with Elven Ambush, but we can do much better in the four-drop slot.

A lot of people are excited about Gala Greeters. A new Rare Elf that does a plethora of different things, is costed efficiently and only asks us to play more Elves. I’m not as excited as some people, but I do see the power here.

I realise this restriction is for balance reasons, but it does limit how far the card will go. I’ll be happy to try it out in Pioneer and Explorer, but I’m dubious about Modern. I’m sure we’ll test it on stream at some point, but my hopes aren’t too high. Gala Greeters might just end up as a glorified Elvish Vanguard. Is that the third time I’ve referenced that card in a row?

Yet another limited-only card, High-Rise Sawjack is my prefered Netcaster Spider replacement. Not only is it not a spider, but it’s an Elf with a CHAINSAW.

I’m quite excited to try out Brazen Upstart in Standard. It’s a decently-sized body that replaces itself on death. Consider it a reverse Elvish Visionary or Skyshroud Lookout. I like value-generating Elves for grinding out an advantage in longer games and this card can provide after actually pressuring your opponent.

Beyond Standard, the three-colour cost really holds the card back, but there’s some potential if a three-colour variant of Elves pops up in Explorer. Maybe an aggressive variant that’s trying to run as many high-power hits off Collected Company as possible. Admittedly, GGG and RGW are very different mana requirements.

Darling of the Masses

Darling of the Masses is the Signpost Uncommon for what Green-White is doing in Streets of New Capenna limited. Unfortunately, that archetype is Citizen tribal and Citizen tokens aren’t Elves. In actual fact, Darling of the Masses is one of two Elf Citizens (there’s a third one in the Commander deck). This makes me question the societal structure of New Capenna (why don’t more Elves have citizenship? Does being a Druid or Shaman supercede citizenship but give you the same rights?), but does put an end to any real Citizen-Elf hybrid deck.

Fleetfoot Dancer really packs a punch. For a card with so few words in its rules text, it gives a surprising amount of Questing Beast vibes. The dancer will most likely be a major player in Standard with how much immediate pressure it provides while also cushioning your life total against other aggressive decks. However, it’s not really doing what Elves decks want to be doing.

Luckily for it, with the pieces we’ve seen so far, we might be able to put together an aggro deck in Standard that just so happens to benefit from some Elf synergies. In that deck, it should really excel as a powerful top-end to close out games while still interacting with our Elves, like Elvish Warmaster. Beyond that, Fleetwood Dancer might make some waves, but not really for Elves decks.

Here we have an Elf that makes non-Elves. While upgrading a 1/1 Elf Warrior token to a hasty 2/2 Cat or a vigilant 3/1 Dog does put more power on board, it also shuts down synergies with cards that care about how many Elves we have. This means making Elves is generally better for us in the long term, but if we’re pushing for game, making Cats could help us get there. This is mostly relevant for one card that I’ve already mentioned once in this article: Elven Ambush. With a few Elves in play, one cast of Ambush with Jinnie out can end the game immediately in a flurry of furry friends.

I’m going to be trying this deck out in Standard. It might not be the best thing going on, but I expect it to surprise opponents with sudden lethal at least a few times.

Rakish Revelers are the Cabaretti entry into a cycle of mana-fixers for Streets of New Capenna limited play. Unfortunately for us, that means it’s really not costed to make it into constructed. While getting two bodies for one card is good, one of them not even being an Elf really doesn’t help.

They put Chord of Calling on a creature!

While Rocco, Cabaretti Caterer isn’t an instant and doesn’t have convoke, there are some benefits to being a creature. Most importantly, the additional body you get with Rocco can be rather relevant, especially if you have cards that care about the number of Elves you control or Elves entering the battlefield.

Rocco will never be as good as or replace Chord, but I do intend to try it out in the Arena formats. Getting two bodies for one card seems good for cards like Rumor Gatherer in a potential Standard deck. If a Historic/Explorer deck can support the three-colour mana cost, I’ll also try it there. I like how you can consider it a Chord of Calling that isn’t blank when you see it with Collected Company. Sure, you don’t get to use Rocco’s ability, but it does lower the misses on Company, which Chord doesn’t.

The Party’s Only Just Begun

That’s all the Elves in the set covered. Not too many breakout cards, but maybe enough at the right level for us to try Standard Elves again. Fortunately, there are still more cards to cover. We’ve even got a new option for an infinite mana combo in Mono-Green in Modern.

Catch us on stream trying out the new cards and I’ll see you next time for the rest of the relevant cards from Srteets of New Capenna.